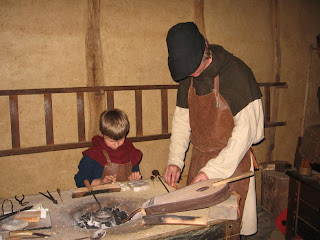 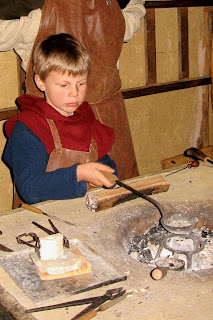 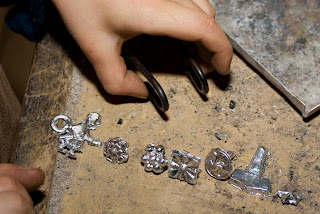 While my husband and son where making pewter dress accessoiries. 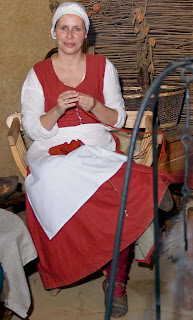 doing some nalebinding, a pair of socks for a friend. 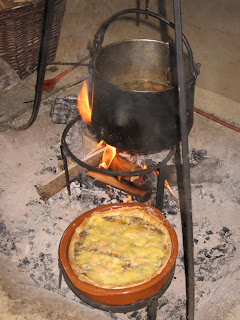 making lunch, stew and a pastry. 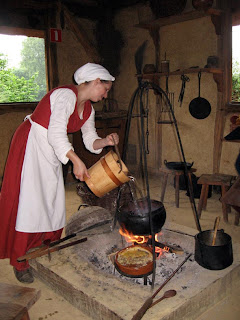 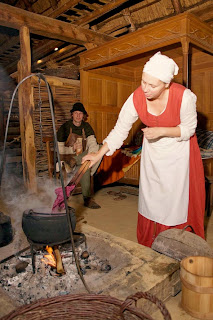 Dyeing with natural dyes, cochenille to be exact.
And this was the end result. 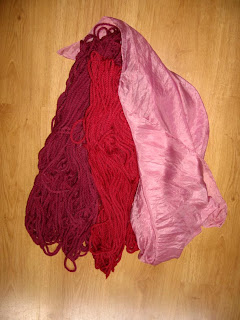 The pictures doesn't do the colors justice. The wool on the left is purple,
the wool in the middle is actually more fuchsia pink than red and the color of the scarf is less strong.
Geplaatst door Marije op 11:03 5 comments: 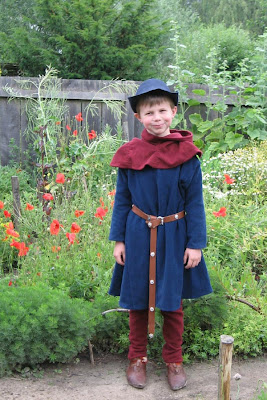 As we only have two medieval events planned, I decided earlier this year not to make my son a new costume. He just had to wear is his old green woollen tunic and brown woollen trousers for another year. At the end of last re-enactment season a friend
gave me a pair of hosen for Myrddin, which her youngest son had outgrown. My son was really excited finally wear real hosen instead of a pair of trousers. This is kind of my own fault. We made him excited for wearing hosen by telling him that hosen where for grown men and big boys in re-enactment and trousers for little boys. So when I told him that he would be wearing his trousers again this year he wasn't to happy.
My son is a little peacock, who really enjoys a nice costume, so last friday I deciced to make him hosen. I didn't have any fabrics that I liked in my fabric stash, what to do now. It was friday, he needed his hosen on Sunday and I didn't have time or money to buy fabric. Than I remembered my old 13th century parti-color tunic which was somewhere at the back of my costume closet. I hadn't worn it for years. When I made it ten years or so ago, I hadn't done much research on who wore parti-colored tunics in the 13th century. When I started to do serious re-enactment I found out that only musicans etc. wore these kinds of garments, so it ended up in the back of my closet.
Finally one half became his tunic, the other half his hosen and hood. The hood was handsewn with silk threads. The whole costume I have made in 1,5 day, with a little help from my husband. Who thougth I was absolutely mad for making in such a sort time. But my son was very happy and proud and that made me very happy.
Geplaatst door Marije op 17:15 2 comments: 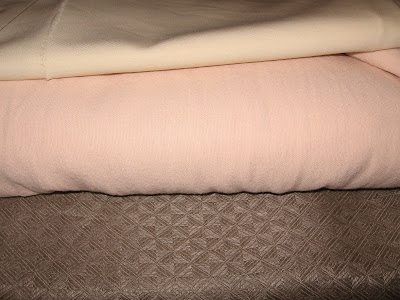 At the vikingmarket in the Archeon last week I bought myself some lovely fabrics. The top fabric is a very thin, light and soft wool (merino, gabardine) which will become an viking apron front and most likely a (medieval) veil.
The pinkish fabric, is also a thin wool, will be dyed with madder and will end up as a 14th/15th century kirtle.
The gorgeous broken diamond twill grey linnen will become a sleeveless viking under/summertunic or a sleeved viking undertunic or a peplos. (The Museum in Assen that has the Princess of Zweeloo says it is white diamond twill linnen.) Although I think it would look really cool as a peplos, I don't get to wear one often. As I don't want to cover such a beautiful fabric up it will probably end up as a sleeveless summertunic slash underdress. If I am really lucky and cut the fabric real economically, we could maybe squeeze out a sleeved and a sleeveless tunic.

Slowly I am starting to prepare for The Anton Pieck Parade (victorian style event)which takes place in December. My husband wants a new waistcoat and my son wants to come with us this year. So he will need a costume. It's hard to find historical dress patterns for childeren, it's even worse for boys but luckily enough Ageless Patterns has several.

This is one I think would be perfect for my son. 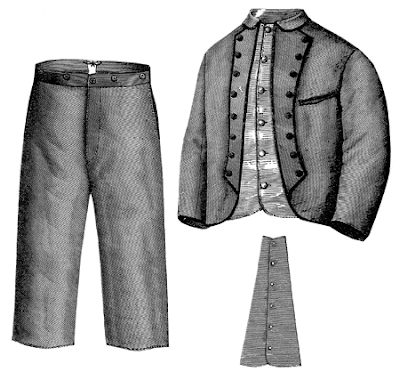 This suit, which was made of gray cloth, consists of trousers and jacket. The last is finished by two front pieces, imitating a vest, of white piqué, furnished with buttons and buttonholes, by which the jacket is fastened.
Geplaatst door Marije op 20:43 No comments: 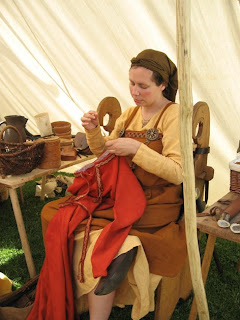 This is, alas, the best picture of me with my new viking costume. In the picture I am sewing on the lovely tabletwoven trim. I was really warm this event, so I didn´t get to wear this set much. I mainly wore my linnen peplos (tube dress) costume.
The yellow apron/suspended dress has been entirely handsewn and I am very proud of myself ;-) I choose to make the later viking period tailored version as I think it is more flattering. 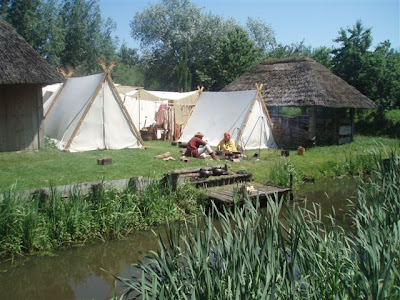 A lovely picture of our encampment from the back, my husband Gunnar and friend Aud are baking pancakes in the heat. 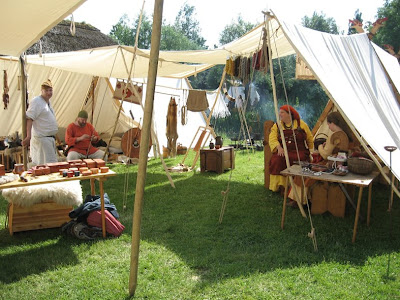 Here a picture of the front. We shared the spot with our old friends from Tjursläkter. Which was great fun, but sometimes a bit crowed.
Geplaatst door Marije op 09:53 3 comments: