It's Beginning to Look a Lot Like Christmas (Dickens festijn 2016,Deventer)

Dickens festijn in Deventer is for me the best way to get into the spirit of Christmas. These pictures where made just after closing time when there wasn't much public left. Although the atmosphere is already magical in the daytime it becomes even more magical when it's dark and all the christmas lights are on. 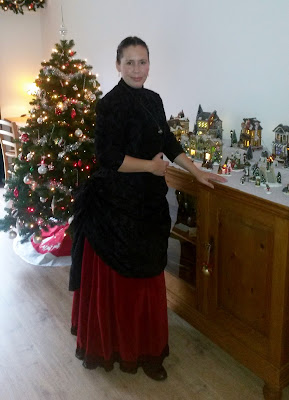 The costume without coat and hat. 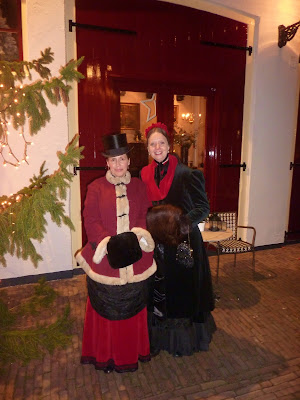 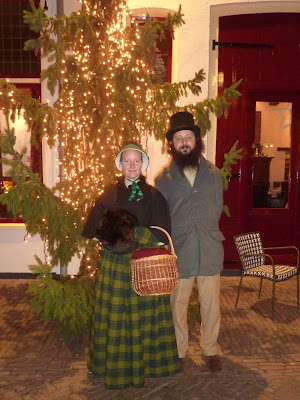 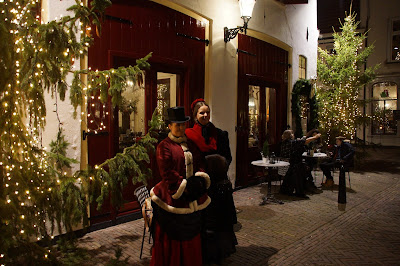 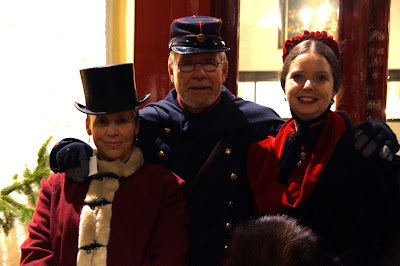 Victorian mailman by day,
photographer by night.
Thanks Richard for the pictures! 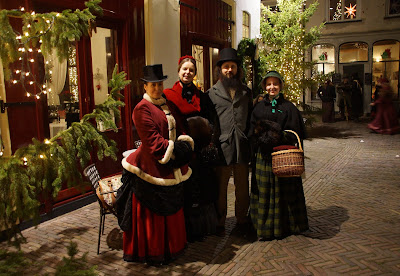 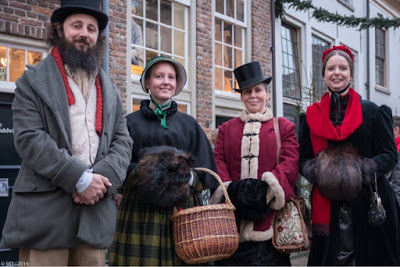 This photo was taken on Sunday by Rob van der Laan, Shoppen in Deventer.
Who on Saturday had also made these lovely portraits of two other Gracieuse members. 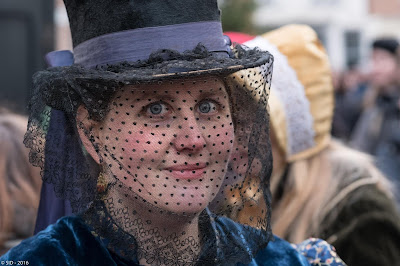 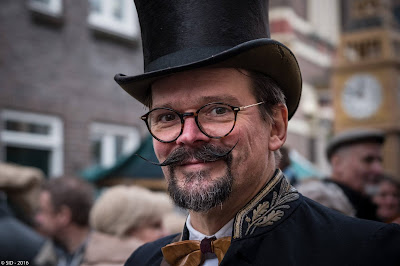 All squared up and still now throw

When I was in the hospital my husband brought me my crochet stuff so I could continue to work on our Granny Square Christmas Throw (or Afghan). He knows that having to sit still drives me nuts, so having my crochet stuff there was really great.

I started working on the throw September 2015, when I knew we where going to move house. I liked the idea of working on something for the new house but couldn't do any big projects because I needed to start sorting and packing stuff. Those little squares are nice little and fast projects you can work on in between other things. Unfortunately I ran out of yarn and the colors I needed weren't being sold anymore.
Fast forward to a year later. I remember the throw and start looking on secondhand websites for the yarn and lo and behold I stumble on the right colors in the right amount of yarn!

Now I have enough to make a throw I start getting annoyed with the small size of my squares. If I have to make a whole blanket with them I will have to make an enormous amount of them to get the right size. So I decided to add another row of stitches. 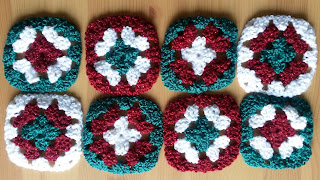 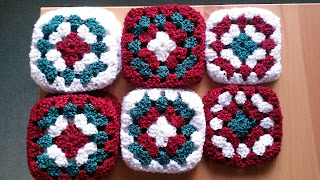 Around the 10th of  November I had enough squares, a 170 of them to be exact. Then it was time to block them to get a nicer shape. 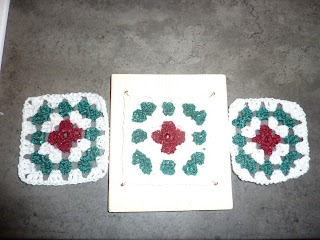 a granny square, after blocking, in the proces of being blocked and before blocking.
The difference is subtle but the blocked square does look neater. 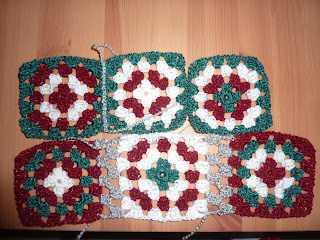 I tried two methods of joining the squares together and decided to go with the bottom version. 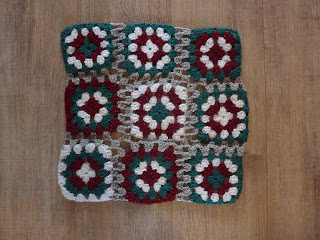 But after making two pieces like this I decided the end result is too wonky. So I am all squared up but still now throw! (Bad pun I know but I can never resist one)

The weather was soft, the company was good and a merry time was had by all. The first t' Straatje van Emma ( The Street of Emma) was a succes. The name honors the Dutch Queen Emma, the wife of King Willem III. Who became Queen Regent for her daughter Wilhelmina after his death on the 23th of November in 1890. 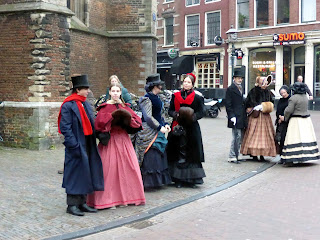 The (in)famous blue coat in action. I think the best part
of the coat are the pockets. 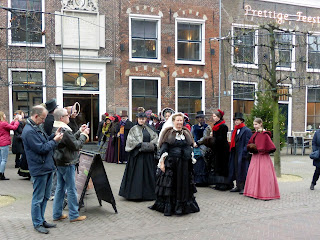 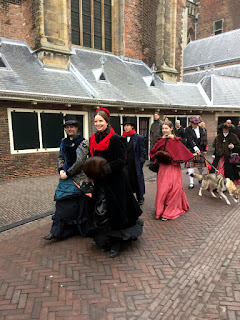 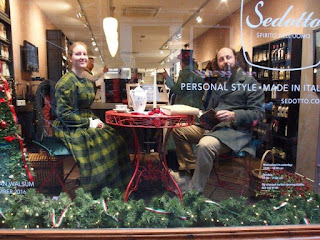 picture taken by Paul Veldhuis.
Roel and Noortje in there home for the day.
I think they make a lovely couple. 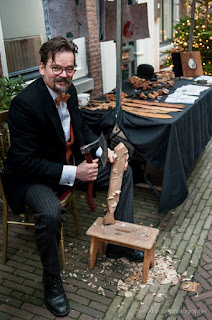 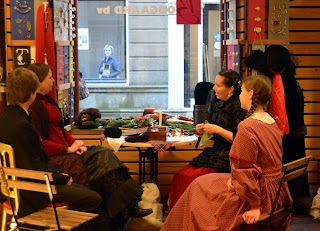 picture taken by Matthieu Besteman
With Alice, my son, my niece in our living room for the day.
A lot of really nice people came in to say hello. 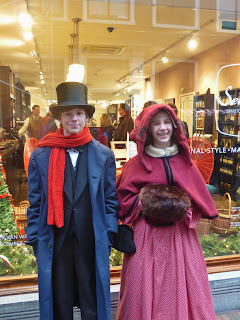 My son with his cousin who ofcourse played his sister.
They had a lot of fun together. 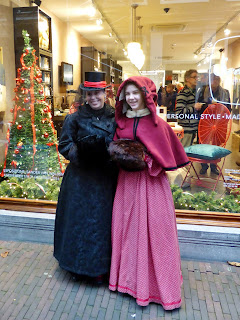 I was a very proud aunt! 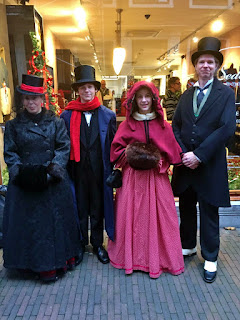 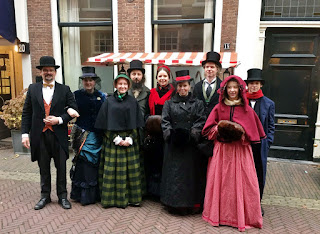 Is it just me or does Murphy's law always apply for those pieces of costume that need to be made in a hurry?

It all started December last year when my son decided that he wanted a grown-up 19th century costume. I feel like making such a complicated outfit for a growing young man is a horrible waste of time so we decided to purchase most of the costume pieces second hand. Vintage is still more affordable than making myself. So it seemed like a good idea and it was! We bought a set consisting of a coat, vest and a pair of pants. The pant weren't in my son his size, he quite long and slender, so a pair of pants needed to be made. As I had been promising my husband a new pair of pants, I decided to not work on a costume for myself this year and concentrate on making my two handsome men look even better.

The trouser for son were finished on schedule and the trousers for my husband were also finished on schedule somewhere at the end of September or beginning of October. After looking for months we decided that the overcoat or cloak needed to be made. We couldn't find a suitable one that also fitted my son. When asked he told me that he wanted a coat not a cloak. We plenty of time until the event I agreed to making a coat for him. I had already ordered the fabric when disaster struck. I got ill, it started out harmeless enough but it turned nasty and I was even hospitalized for five days. After that I needed time to recover. All in all I lost more than a month of sewing time! 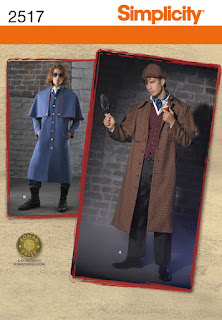 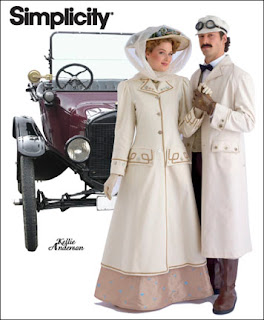 To my great dismay my son wasn't really interested in either one of them. When I asked him what kind of coat he wanted he showed me this picture. 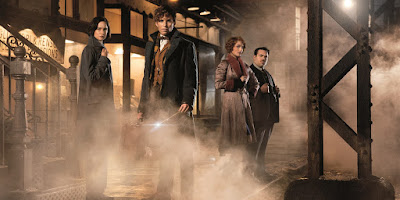 He wanted the blue coat from Fantastic Beast and where to find them. I wasn't really thrilled about it because the film is set in the mid nineteen twenties but as we consider ourselves lucky that he still wants to join us at events. We thought that a little cheating wouldn't be that bad.

I ended up combing the patterns I already owned and I am happy to say the coat is almost finished but it has been a real struggle. The event is this Saturday and there is still an awful lot to do! First things first, finishing the (in)famous blue coat.

For those of you in the neighborhood. Our group will be attending this event: 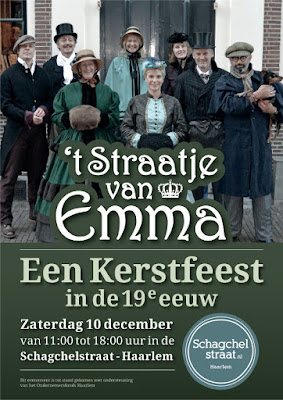